Getting started
Why build an observatory?

There are many reasons to build an observatory. The Halifax Centre for years had used various places to observe: provincial parks, parking lots, and private lands. None of these locations were truly suited to observing and all had individual problems such as winter access, lack of facilities, light pollution, distance, and many others. The Centre members decided to solve these problems by designing and building their very own observatory in a suitable location.

One side benefit of building an observatory was that it provided a project that members of the Centre could rally around, providing an added incentive for joining and remaining a member of the Halifax Centre.

Selecting a site for an observatory is a time-consuming and controversial process. Before starting a search, a list of requirements should be drawn up and agreed upon. Our list included: a travel time from the city center of about 45 minutes to 1 hour, good southern horizon with minimal light pollution, high elevation (to be above fog), access to electrical power, all-season road access, security, protection from future light encroachment and lastly: affordable!

With theÂ requirements list in hand, a map of our area was studied and a circle drawn to define the limits of theÂ search area based on one hour of driving time from Halifax. AÂ wedge to the north of the city aligned with highway 102 was excluded because otherwise all the light pollution from Halifax would be in theÂ immediate south. With theÂ map and some topographical maps, areas of higher elevation were checked outÂ for reasonably clear horizons and available land. 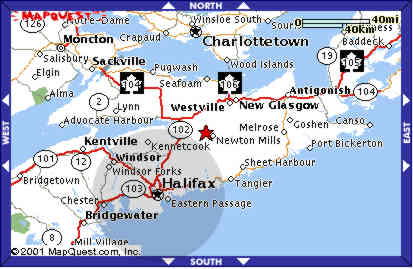 One of the first areas examinedÂ was along Highway 14 southwest of the Halifax and just north of Chester. AÂ hill site that had been cleared by a forestry company with a telephone relay tower on it, so power and some security were available; however, the road switchbacked up a steep hillside and it was noted that it had been washed out many times, so access would be limited. Likely, cars would not be able to get up to the site in the winter and spring. So this site was placed on a secondary list of possibles but not recommended.

The second area examinedÂ was to the northwest of Halifax near Kennetcook. Although Halifax was near, the light pollution dome seen from this site only extended 5 degrees above the southern horizan, but all the other horizons were incredible! This site is known as Courthouse Hill in Gore, and one can see for dozens of miles in all directions; however, two things were discovered when a test observing session was held there. First, several roads converged on the slopes of Courthouse Hill so when cars were coming up these roads their headlights would directly flood the spot we wanted our observatory. So much for astrophotography and maintaining one's night vision! Secondly, the hill is very exposed so there is almost a constant wind. Without shelters and wind stops, observing would be difficult and in the winter it would be almost impossible to observe outside. The final closure on this location as a potential observatory was the cost of land. The local farmers were asking $20k per acre, a bit excessive for what amounted to stone and blueberry fields.

On October 28, 1994, the third and final spot investigated was suggested while we were testing out the Courthouse Hill site. Dr. Roy Bishop - our HonoraryÂ PresidentÂ -Â suggested a site he knew in St. Croix. Everyone packed into their cars and followed Dr. Bishop to the site, which was located in a wood preserve and watershed area owned by Minas Basin Pulp & Power. The site had very nice dark skies, the horizons in the south were clear of light pollution, the light pollution dome from Halifax wasÂ low in the southeast, and the light dome from nearest town Windsor was quite low in the northwest. The site was inland and away from the coast so there was a lower chance of fog, and was in a slight hollow that protects the area from wind. The site was surrounded on three sides by water, limiting access to the site (also a nice chorous of frog calls in the spring and fireflies all summer). 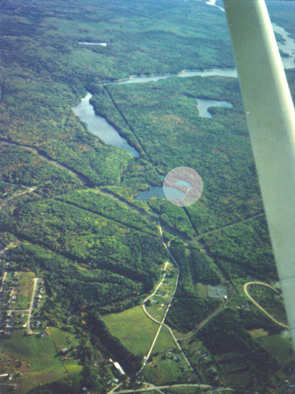 Above is Mary Lou Whitehorne'sÂ aerial photo of St. Croix and the Minas Basin Pulp & Power watershed. The shaded oval near the center of the photo is the location of the St. Croix Observatory (south is towards the top of the image).

The road to the site is a private gravel road owned and maintained by Minas Basin Pulp & PowerÂ who are our landlords. We were offered a lease on a small parcel of land for the observatory in 1995 which saved us from buying land outright, allowing us to start building right away. Minas Basin Pulp & Power protects the lands around its watershed and has no immediate intentions of developing the land. This will protect the observatory from cottage or house lights for the foreseeable future.

Two other nice features discovered later were that, rather than paying thousands of dollars for a piece of land at Gore, the SCO site could be leased for a dollar a year, and it came with a friendly fellow named Jamie Carmichael who drives past SCO every day and keeps an eye on it. AllÂ that Halifax Centre members had to do was: choose the best site for an observatory; clear the forest for a driveway, a parking lot, an observing area, a view southward; and construct an observatory building plus two additional buildings, one for warmth and one for storage and a toilet. Those several tasks were accomplished between June 1995 and November 1996, with the exception of the storage shed which I believe was completed later. Dave Lane and Dave Chapman were Centre presidents in those years and deserve much credit for making SCO a reality.

A design committee was created and quickly realized that the project should be broken up into several phases. The first phase would see the design and construction of a warm room and a rolloff roof observatory so members could use the site year round. the second phase would be the installation or building of a washroom facility. Lastly, we would build a main observatory housing a large-aperture telescope.

Design considerations for all the buildings planned:

To reduce the maintenance costs, all the buildings are clad in white vinyl siding and white aluminum metal roofing. Insulated metal doors are used, swinging out so they can't be kicked in, and deadbolts are installed. The windows are small and vinyl-clad and are located high up on the walls of the warm room so no one can look in easily nor climb in through them. We also have window security grills so no-one could get in IF a window were broken. We used typical stick-frame construction methods to build the buildings, using 2x4s for the warm room walls and RASCan walls, and 2x6s for the rolloff observatory walls. This method of construction is common and easy for amateurs to employ.

Once the site was surveyed we selected the best location for the future main observatory and then determined the locations of the warm room and rolloff roof observatory based on where the most desirableÂ area of the sky was located. For us, that is the southeast through to the southwest.

Site plot drawn by Paul Gray after an exhustive day of surveying the site. We placed stakes in the ground to mark the driveway and building locations so we could next clear the trees from the site.

After several meetings the final layout (above) of what the design committee felt would be a good design for the observatory was presented to the members of the Halifax Centre. Many approved of the plans even though it was a very ambitious project. Next phase construction... 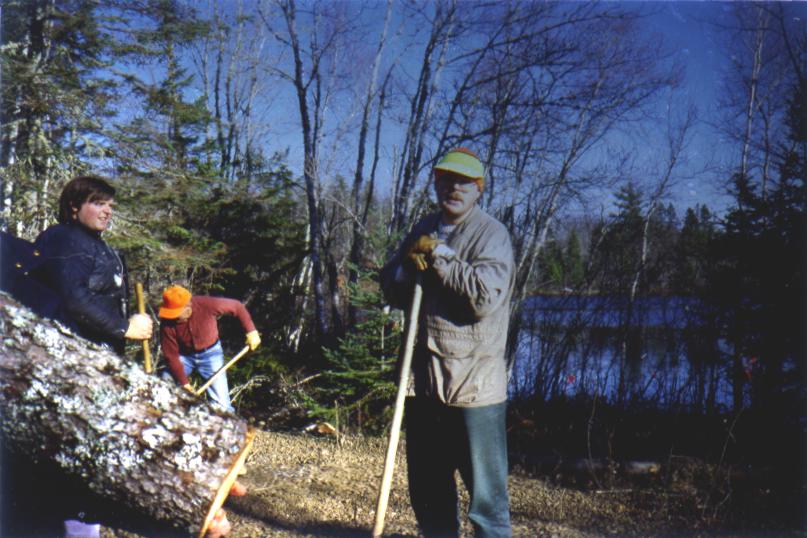 Bright clear fall Saturday and the site clearing team are hard at work? 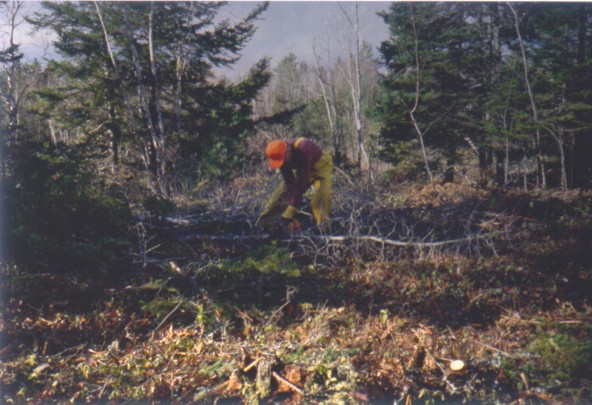 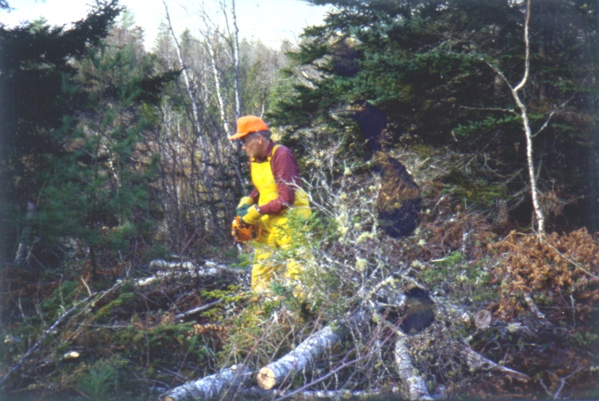 Don't leave Roy alone for long with a chain saw! 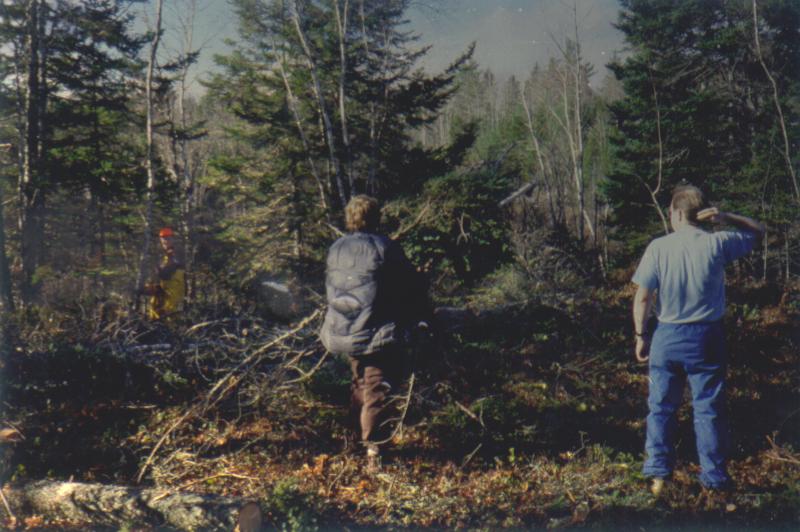 Are the western horizons good enough yet? 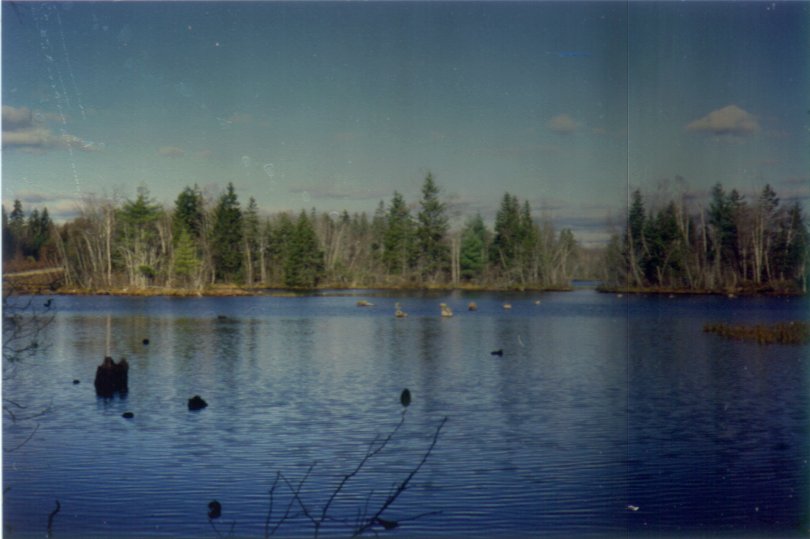 Above is the view of our southern horizons after a few days of cutting and clearing. 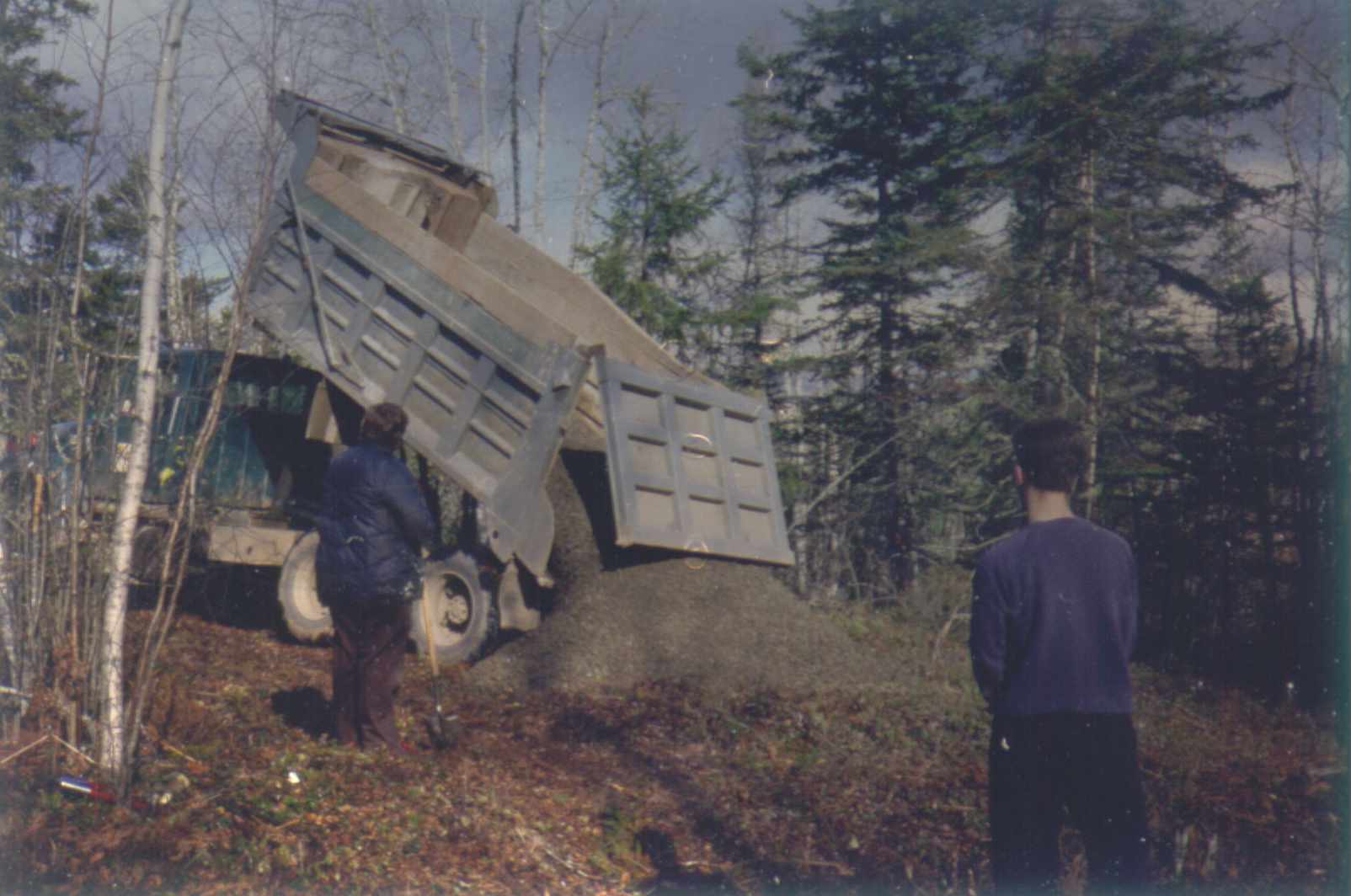 The first load of gravel for the driveway and parking area arrives. 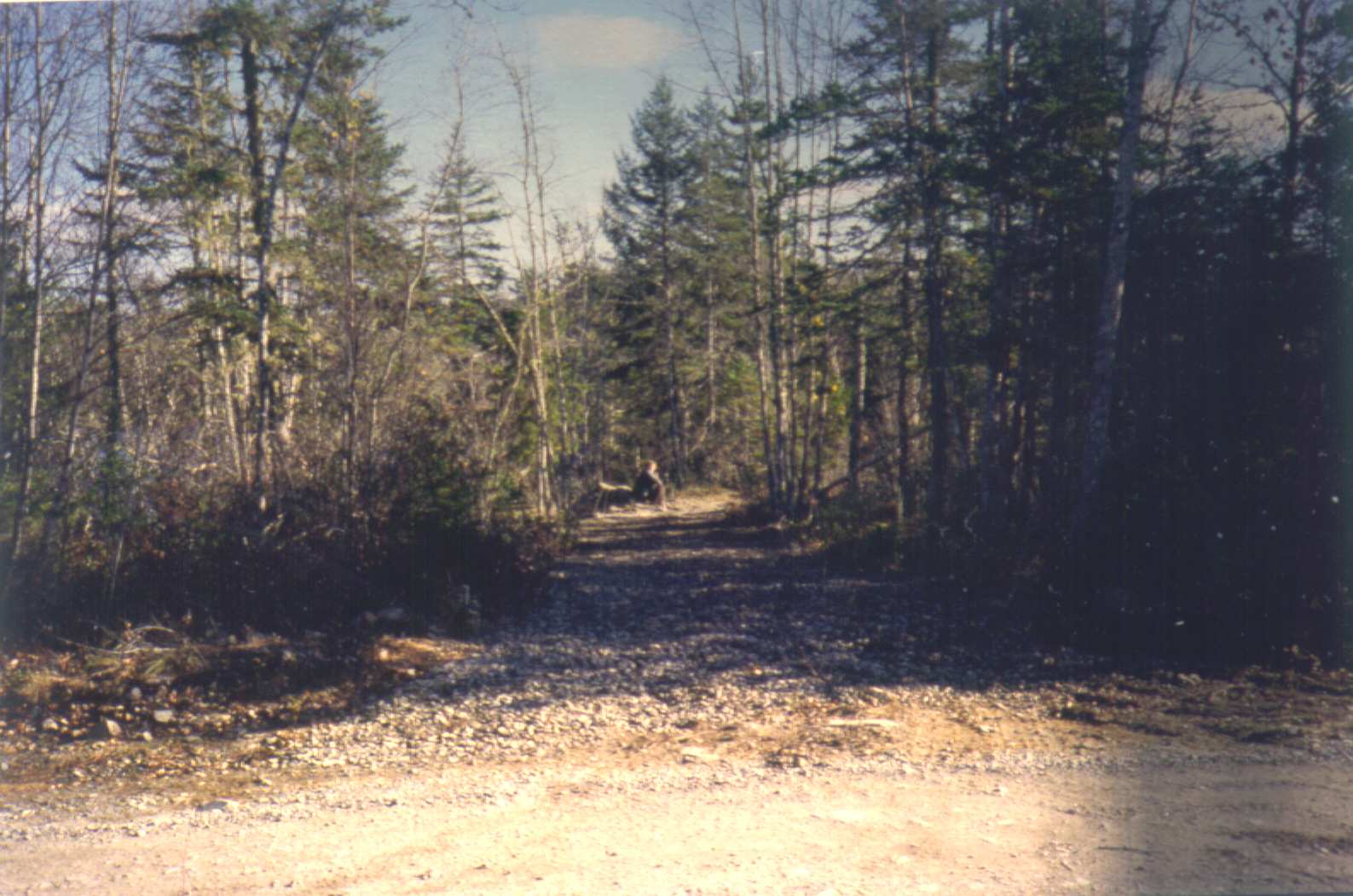 A view toward the road of our completed driveway, over 15 tons of gravel were spread by hand to make the driveway and parking area. 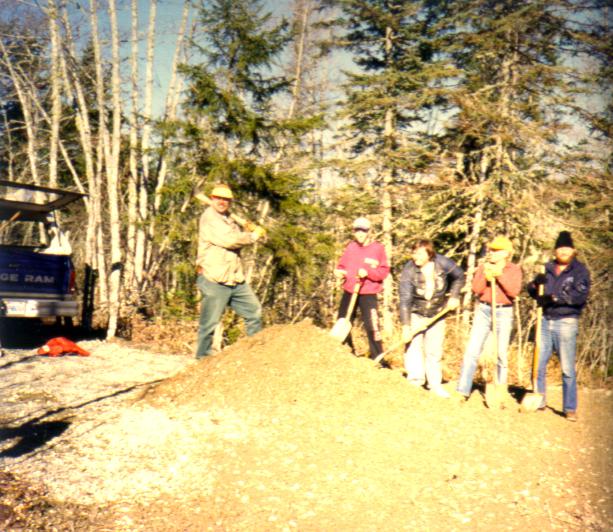 The gravel spreading team. A few sore backs from that job. 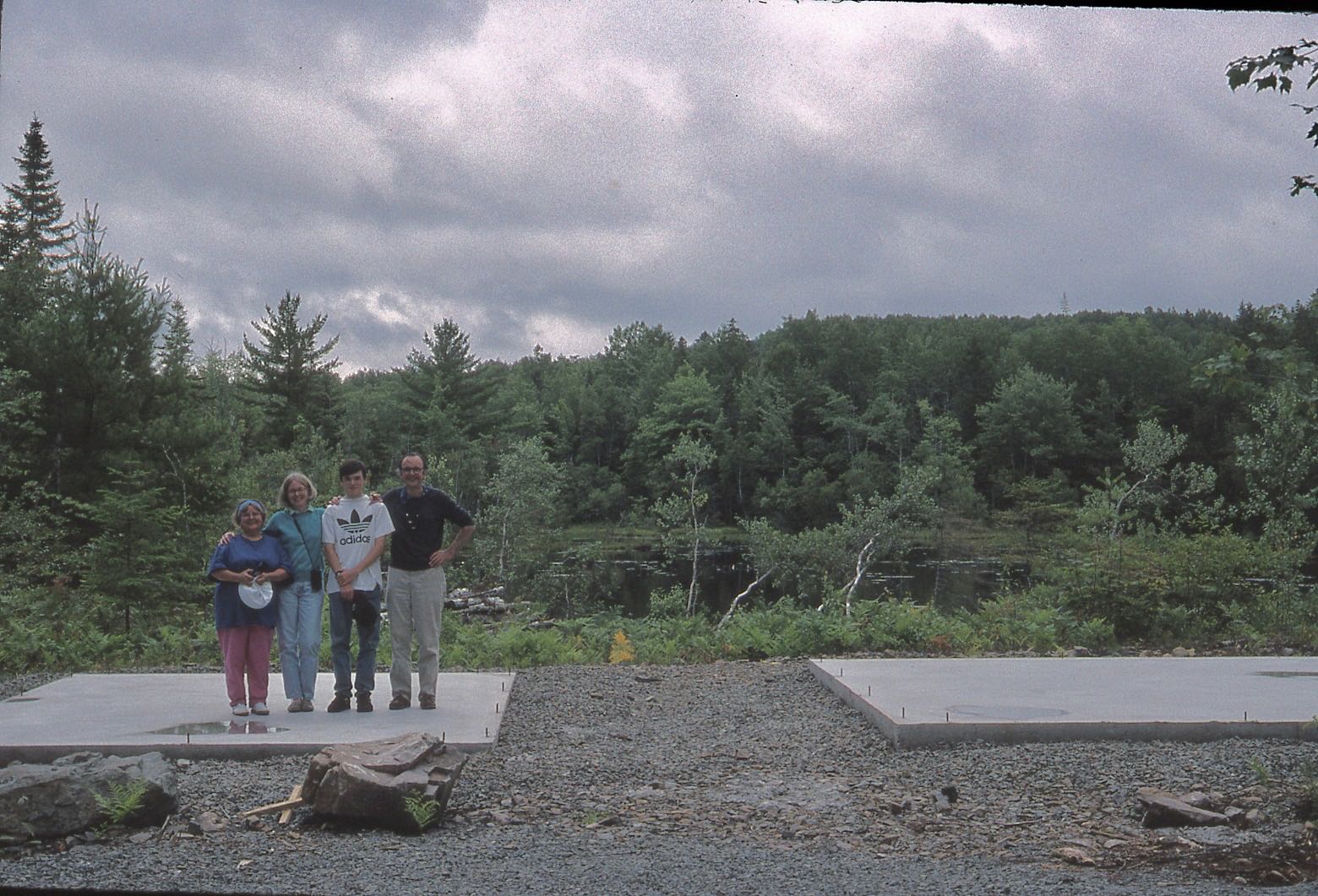 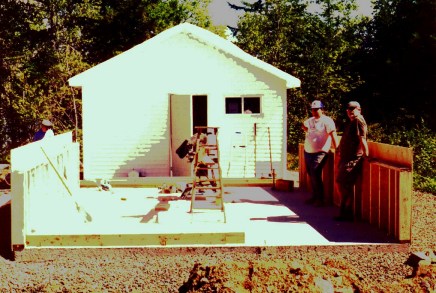 View facing east towards the nearly completed warm room, and the start of the roll-off observatory. The knee walls are constructed from 2x6s and are 3' 2" high. The top edge of the plywood sheets are 4' high, the 10" difference was left for the 6x6 track beams and the 4" angle iron used on the top of the wall for the track system. 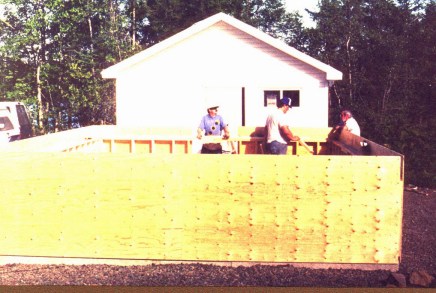 Roll-off knee walls nearly completed. Note the high level conference taking place: they were busy figuring out what to do next. 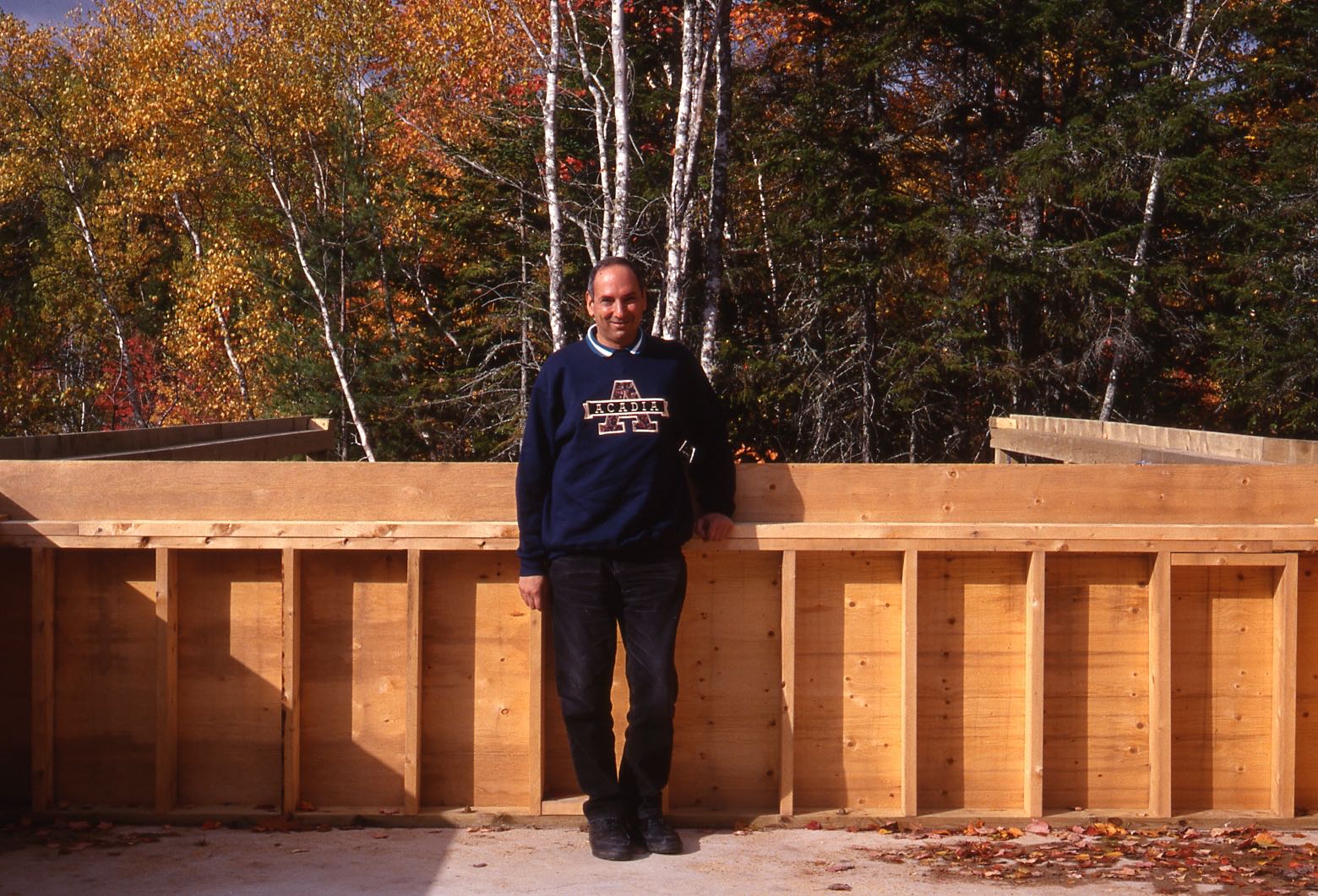 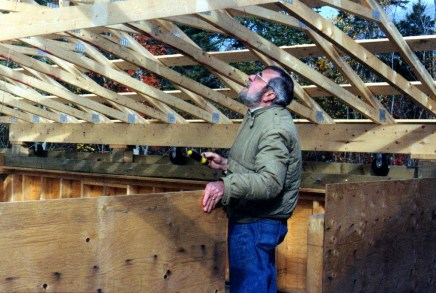 After completing the knee walls the 6"x 6"presure-treated carring beams for the track system were installed. Then three 2" x 10" beams were assembled on the floor to create two 6"x10" carring beams to support the roof trusses.The castors were also installed while the beams were lying on the floor. When the beams were completed we hoisted them up onto blocks sitting on top of the knee wall. The Block held the beams level and square to one another until we finished the roof. We had pre-engineered scissor trusses made for the roll-off which can be seen installed on top of the carring beams in this photo. Scissor trusses are ideal for a roll-off roof, they have no horizontal forces so they don't push your walls out, also they provide more head room inside the roll-off when the roof is closed. At the walls we have a 5 foot clearance and about 61/2 feet of clearence down the middle of the roll-off. Also in this photo you can see the 1" x 6" boards used to support the metal roofing on top of the trusses, also Clint Shannon is seen here inspecting the truss system. 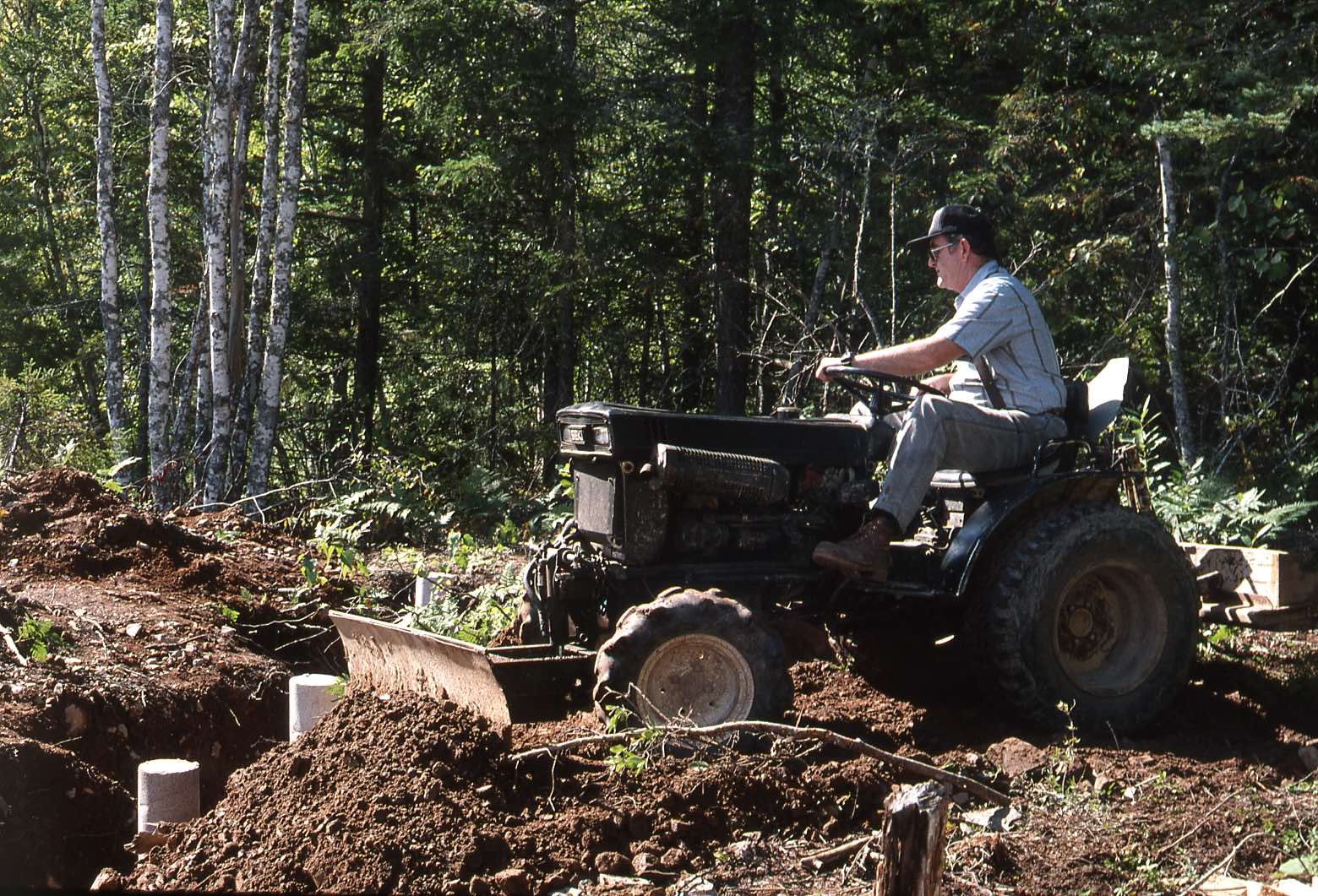 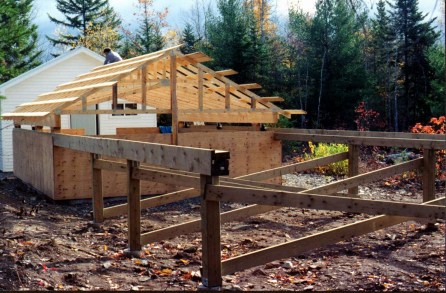 Facing South-east, is the nearly completed roof system waiting for the metal roofingcladding and the completed 6" x 6" beams and posts that make up the track system for the roof. 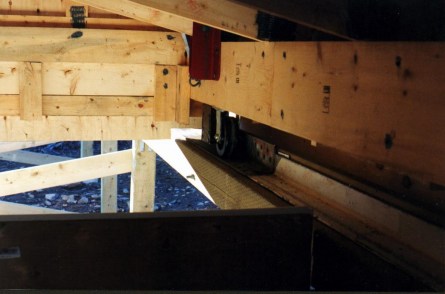 Close-up the track and beam system we built. Notice the 4" x 4" x 3/8" thick galvanized angle iron use for the track surface. Seven hundred pounds (100 ft) was purchased from a scrap yard for $100, it came from a scapped high voltage transmission tower (there should be alot of this available in Ontario and Quebec from the ice storms). A roof this size will not easily roll on wood, but with the steel clad surface one person can push it with a finger. We estimate that the completed roof wieghs about 2000 lbs. 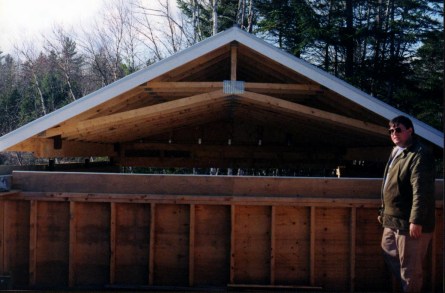 End view of the completed roof and truss system rolled off the observatory. You can clearly see the design of the scissor truss in this photo. 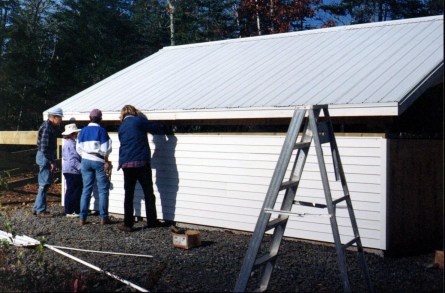 View ourÂ SCO Gallery of photographs of the SCO and the 17.5" telescope.